In 1991, filmmaker Lawrence Kasdan created Grand Canyon, a thematic follow up to his hit The Big Chill, focusing on the lives of individuals from different classes in the great melting pot known as Los Angeles. Fourteen years later, Academy Award-winning writer Paul Haggis boosts the tempo on Kasdan’s formula with Crash. Instead of looking at classes, Haggis focuses on race relations and postulates that it’s not that everyone in LA hates everyone else, they simply downright despise each other. 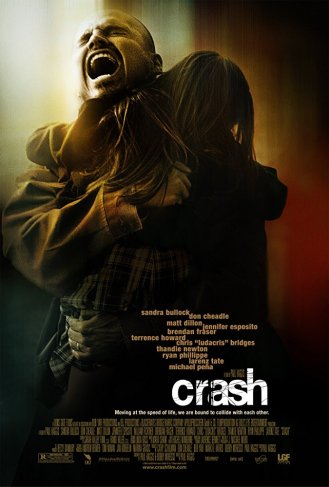 No one is safe in Haggis’ hands, which beautifully amplifies the awareness all Los Angelinos must feel, as his cast of characters include questioning Anglos, surviving African-Americans, angry Persians, working Latinos, and the downright criminal Korean. Much like in a Robert Altman film, the cast interacts with each other in unsuspecting, cyclical ways. The two misunderstood African-Americans who hate to be profiled end up car-jacking the very-whitebread DA and his wife. The white rookie cop has to deal with his racist partner and his callous captain. A Mexican locksmith becomes a scapegoat for a Persian shopkeeper. An African-American detective is in love with his South American partner. All these roles are admirable played by an exceptional ensemble cast, many of whom are not known for serious drama work.

The story focuses on events that try the souls of mankind: carjacking, fender-benders, break-ins, shootings, racial profiling; events that make citizens feel hurt, afraid and, most of all, angry. It is this anger that Haggis shows so well and the emotion is cast from the screen like a betrayed friend. Haggis also substantiates that no one in the overpopulated metropolis of his film interacts or understands their neighbor, and that this lack of touch is a direct result of their own anger and fear – and it doesn’t take Yoda to point that aspect out.

“In LA, nobody touches you. I think we miss that touch so much, that we crash into each other, just so we can feel something.”

Haggis takes the next hundred odd minutes proving his thesis statement on anger and fear in a dramatically beautiful way. He then surprisingly does something else: he shows that love still exists in the City of Angels.