Am I allowed to discuss clients’ names, work details, and meeting specifics in my personal blog? More importantly, do I want to have my work, which is already more invasive than kudzu, occupy a space that is supposedly designated for personal freedom? The answer to the latter is obviously no, however, certain events within have a personal demand insisting that some light reveal that which was once hidden.

Not that any of which I am about to reveal was all that hidden to begin with. 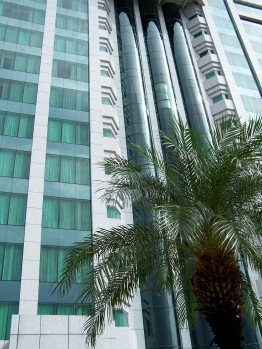 The bank, a large, successful bank in the Philippines, had an impressive edifice. The marble walls that greeted us were gray in both stature and ascetics. Gray in attitude was the armed guard who did not make eye contact, but was certainly watching. His M-16 rifle slung over his shoulder pointing down, but ready to unleash the murderous rage that it was assembled for in a second’s notice, a wish that the guard perhaps secretly wanted to grant. The lobby was sunny as was the attitude within. The large atrium with its long teller window was amply staffed, welcoming its customers in a style that is very quickly being forgotten in the US. As we progressed higher, the sun, light, and attitude rapidly changed.

The meeting was scheduled for the fifth floor. We were led to a server room. Not a conference room. Or training facility. A server room. Granted, this was not a usual place to give a presentation for an online banking system, but seeing as how this was primarily a meet-and-greet with high-level IT staffers, this move was not entirely shocking. However, the fifth floor here hadn’t seen a paint job since the 1970s. Hallways, offices and cubicles were cluttered, stocked to overflowing capacity, with boxes, monitors and PCs. The computers lining this mass grave were easily 286 and 486s as three-and-a-half-inch drives could be spied on all of them. I was looking for the much-more elusive five-and-a-quarter knowing that they had to exist within the pile. In the server room itself sat an immense dot-matrix computer and more monitors – just monitors – their black soulless screens crying out to be turned on to display their VGA action just one more time before eventual, ahem terminal, retirement.

Here was to be our stage. Fourteen chairs of all different colors and sizes pulled from any available cube or office, sat lined up in two rows. And so we began.

I know how to do my job, and I do my job. well. Our audience was friendly and the presentation fit the sales pitch perfectly. All was great. Right?

Stage two of the presentation, initially scheduled for that afternoon, involved a conference call. Conference call? No problem. This call, set up with the next level of movers and shakers, was for participants overseas. With London. And New York. Yes, the humor of the situation most certainly did not escape me. I actually traveled to the Philippines in order to have a phone conference with New York City. I had a laugh over that when the agenda was released. Not one of those boisterous, hearty, deep-from-the-belly-and-laugh-out-loud kinda laughs. Nor was it one of those damn-smart, getting-the-in-joke type of short, hilarious burst of laughter one can get from seeing Anchorman or American Splendor. Oh no. This was one of those situations where your body doesn’t know what to do, so instead of crying, you laugh. It’s a weak, sweaty and totally phony laugh. And I laughed.

The time zone difference actually worked out well for this instance. The conference call was scheduled for 8 PM local time, allowing my party to conduct the affair from the hotel’s business center, which actually ended up being rather pleasant. Contributing to this change of attitude was the fact that just across the hotel lobby from the business center was one of the lounges and in that lounge was San Miguel beer. Nothing beats conducting business than doing so with a friend or two. Or six. Or seven. And Saint Mike and I were becoming fast friends.