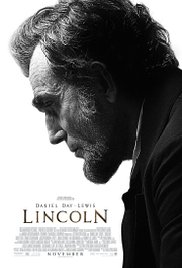 Daniel Day-Lewis steals the show as the title character in Lincoln, but by all rights, the film itself could have been named Amendment XIII as the second act’s energy, as well as most of the third, is focused on the debate in the House to abolish slavery nearly leaving Lincoln as a mere witness to history while a cast of character actors from screens both big and small pound tables and chests alike in a grandiose fashion.

Director Steven Spielberg, and his long-time cinematic director of photography Janusz Kaminski, created a gorgeous movie where they carefully and beautifully frame each shot allowing the audience to play historical witness. Similar to Spielberg’s work in Munich, the camera is expertly placed, rarely moving, allowing for a perfect spectacle of a scene: be it the aftermath of a bloody battle, the always-smoky rooms where speech itself has somewhere to hide, a rocking chair on a rickety floor that looks ancient even for 1865, or the bright, winter sunlight filtered through the gauze of either a window furnishing or a washed-out flag. Likewise, Day-Lewis himself is always framed, the camera accenting on his height, catching the lines in the gray of his face as he bears the weight of a nation divided playing equal parts father, preacher, lawyer and, most of all, grand storyteller.

The film keenly focuses on those individual glances but the overall story itself is not as put-together. A series of poignant, incredibly-acted, well-constructed scenes are displayed; each scene a marvelous production complete with conflict, character exposition, and beautiful dialogue. Yet these scenes are nearly staged as free-standing productions by themselves and, other than the overarching story detailing the end of Civil War and the proposition of Amendment XIII, miss any flow connecting them and strengthening that overall narrative.

Again, it is the presence of Day-Lewis who provides the human touch to the drama of politics. Amidst the yelling and the smoke and the death that incorporates nearly every scene, Day-Lewis’ Abraham Lincoln has the ability to smile and, in a move completely foreign to modern-day presidents, sit and speak with the everyday man. He knows this is who is fighting his war and also knows that these very same people will find their own strength to rebuild America. Like a grandfather, he has stories to tell bringing relevance and peace to the chaos of the day, and just not his with own family where a slightly-miscast Sally Field, playing Mrs. Lincoln, adds embarrassment and strife while Joseph Gordon- Levitt, as Lincoln’s eldest, wants to be the attention-grabbing rebellious son but at least maintains his nobility, even when being ignored.

Spielberg elevates the spirit of the man, in a similar manner to what he accomplished with Oskar Schindler, by bringing relevance and importance to that man’s place in history. Spielberg shows a man who was able to work both with and around Congress, wanted peace badly enough to fight for it and was taken much too abruptly leaving any future potential into the smoke of history.