Looking for a hard boiled tale? One of a down-on-his-luck PI who gets wrapped so tightly around the soft, manicured finger of a femme fatale that he agrees to a bank heist? Want to read about a former hipster now rough-talkin’ zero with a craving for bad beers? Then jump on in to Vertigo’s Jonny Double mini-series. Save for the occasional shark going after that trail of blood, the water’s just fine.

Before the advent of 100 Bullets – and when 100 Bullets was a fresh, easy read full of mystery – Brian Azzallero and Eduardo Risso plied their first creative venture in a vein that was, in the late 1990s, only successfully 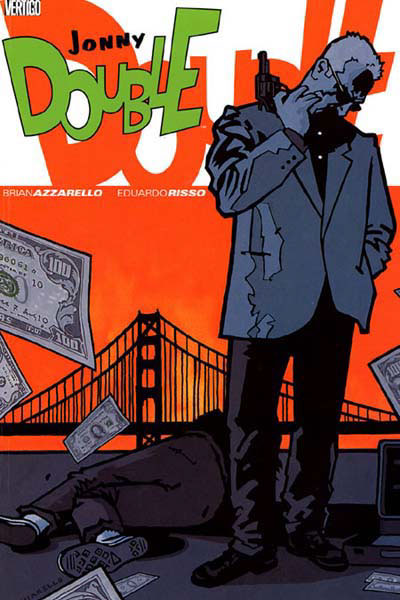 tapped by Frank Miller. Although certainly nothing new in terms of the genre was presented here as the story ran through all the proper cliché beats that such a tale should take – the scheme within the scheme, the backstabbing, the slight twist at the end – Azzarello and Risso create a fun tale that explores not only a relatively new venue of the time, that of cybercrime, but also of the generational gap that was approaching with the end of the Twentieth Century. Double obviously represents that tough era of yesteryear that is fighting to stay relevant using both fists with the occasional head butt. The kids, all beautiful, seem to only care about the present: getting money and going to raves, work be damned. In tales such as these, however, all parties, regardless of their age, are damned.

Risso, like the aforementioned Miller, loves playing with shadows, but doesn’t parlay his use of negative space to the extreme. His panels flow as his characters move. Azzarello’s hip dialogue does its thing equally as well, the on-going monologue a homage to the medium.

Like most genre tales, excellence and entertainment are garnered not from originality, but style. Jonny Double is loaded with style.