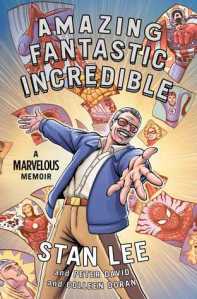 How else would one expect Stan (the Man) Lee to craft his own memoir than through a bombastic graphic novel, where he speaks to you like a friend about his MARVELous life – and he does this in the mighty manner that only Stan knows how. With fan-favorites Peter David and Colleen Doran along for the ride, the graphic novel explodes with four-color stories and secret origins a go-go.

Unfortunately, the story doesn’t go any deeper than that.

Granted, Amazing Fantastic Incredible is Stan Lee’s story, but so much about Stan is synonymous with Marvel Comics and aside from his tales on creating some of pop culture’s most known and loved characters, as well as a few of Marvel’s business owners’ problems, the memoir doesn’t dive deep into the bullpen. Instead, Stan crafts the tale he wants to tell – and tells it entertainingly well.

For that deep dive, I highly recommend Sean Howe’s Marvel Comics: The Untold Story. In that novel, Howe prints a tale related by Jack “King” Kirby where Jack, who had since switched to working for DC, was being interviewed on a New York radio program. Before he could begin to speak about his relationship – and subsequent falling out – with Stan, Lee calls into the program, shanghais the interview with a barrage of superlatives, and promptly leaves. Afterwards, Kirby just sighed and said that conversation summed up his working relationship. Amazing Fantastic Incredible left me feeling the same way. Explosions and exclamation points. Fun memories but nothing too deep. However, I think I was smiling a helluva lot more than Jack.