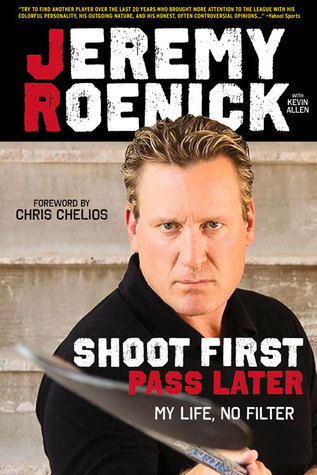 Jeremy Roenick’s first book, his autobiographical J.R., was everything a fan would expect from the slick-talking, loud-mouthed former hockey player. The read was fun, raw, honest and it totally felt like JR was telling you a story right there in person at some dive bar. His follow-up, Shoot First, Pass Later, feels like extra material that was tacked together as sort of a post-script.

Don’t get me wrong. When Roenick talks, people listen. He is an entertaining and engaging speaker who always adds humor to his insights. And for that aspect alone, Shoot First, Pass Later is a fun, satisfying read that any fan would enjoy. Unfortunately here, JR tends to ramble on about golf. A lot. Two full chapters worth as well as significant portions throughout. Reading about golf is about as exciting as it is watching the event on television, and for a hockey fan who is used to fast-paced action, golf is like attending a Grateful Dead jam session after leaving a Thrash Metal concert.

What does make JR’s book great, however, is when he is laying out all of his opinions. He talks the about the current state of the game, both calls out and praises players and, best of all, offers key advice to young players who are looking to work up through and into the NHL. When he gets repetitive on topics and stories covered in his first book, the pace again slows.

Again, the tone and and familiarity incorporated within is what makes this a easy, enjoyable read. And face it, true believer, if you are a JR fan, you’re already sold. And you will enjoy it. Just like the tale of his 500th goal, though, the finale might not be as spectacular as originally desired.