The comic-industry tradition of inviting a celebrated author from outside the medium to craft and guide stories in the hopes of adding a new direction to an older, existing character and, more importantly for the business, of capturing the attention, and funding, of a new audience has met with mixed responses over the years. However, the introduction of new blood is generally viewed favorably. Judd Winick worked in pop-drama, Greg Rucka and Ed Brubaker had high-crime sensibilities, while Kevin Smith was… slow. And, sometimes that outsider’s vision must be tempered and edited to mix in with the established beat of the channel. Consumers sometimes do not get that instant gratification as the writer produces a slow burn. Here then, is Ta-Nehisi Coates’ introduction to Black Panther in A Nation Under Our Feet. 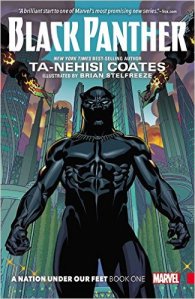 Coates goes forth and makes the Panther’s home nation of Wakanda the central character, going so far as even providing a map of the fictional locale. He questions the idea of a monarchy and postulates the beginnings of revolutions, be they philosophical or physical. He asks how a nation recovers from tragedy, and how it dreams of grandeur. Pretty lofty and exciting ideas for a mere comic book. However, in doing so, Coates nearly neglects the title character, the Black Panther himself. The result, is a slow, political read with flashes of action, like John le Carre set in Africa.

Coates’ story is tempting. How often does a superhero, and a member of the Avengers at that, have to deal with true-to-life democracy? Certainly, other established monarchs, such as Namor and DC’s Aquaman, spend much more time off the throne than actually on. The story can also be confusing with many elements and discussions occurring off-panel, the establishing of new players without full introductions. and the setup, coming off previous storylines, can especially be puzzling for new readers to the character.

However, Brian Stelfreeze’s magnificent artwork aside, the tease to the upcoming pay-off does play well and provides insight into Coates’ long-play. Hopefully the end game will be worth it. And, maybe, we will get to see King T’Challa in the jungle action adventure he deserves.