Joe Ide opens Wrecked, the latest of his neo-noir IQ series, with the book’s protagonist in a world of trouble. For Isaiah Quintabe, the eponymous hero of Ide’s novels, his world consists of the mean streets of LA. Yet, hot to help a desperate artist track down her long-lost mommy, IQ’s world expands as he becomes tangled with Blackwater-ish consulting firm involved with the Abu Ghraib atrocity. IQ, naturally, only wants to be involved with said desperate artist and her tricked-out GTI. Wrecked, unlike Ide’s other offerings, sets IQ’s usual introverted coolness into conflict with a perilous need for action. Intuitive reflection gives way to risky reaction, placing this otherwise unique offering a step into the general genre.

Ide is a master in presenting a character’s progression. Dodson, IQ’s quote-unquote partner, is a newbie daddy who begins to realize that the hustle of the street is not beneficial to being a father, or a husband. He introduces Grace, who is neither quite a damsel-in-distress nor a femme fatale yet sits in the delta of the love interest Venn diagram. Ide, as always, excels in cutting to the quick with the villains du jour:  Walczak, an ex-CIA op, and Rictor, a disgraced ex-LAPD. Ide gives meaning to their machinations and even a touch of honor to their code, warped or not.

Wrecked, though, has too much going on in the peripheral to properly come into focus. 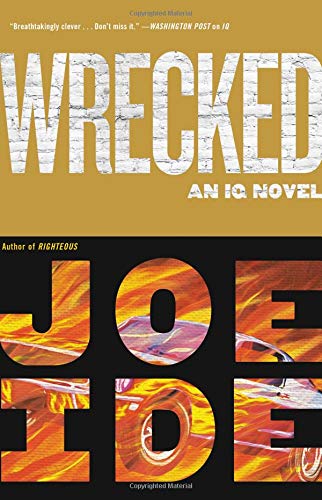 Aside from the case with Grace, IQ dabbles in other side projects as well as his dealings with Seb, the Rwandan criminal responsible for the death of his older brother. Any of these sub-plots had the potential of greater real estate and at least one instance achingly demanded more screen time. Mixed altogether, Wrecked becomes heavy with possibilities, slowing down its cause for that one righteous quest.

Wrecked is a hip, cool cat of a crime tale stroking Ide as a worthy successor to Leonard’s offbeat tales. IQ’s mythology works at its best when pitted intellectually against a foe while verbally sparring with the slick-tongued Dodson. Wrecked is pure mainlining of adrenaline. It misses out on those quiet beats where the story usually comes together deep in Isaiah’s thought stream.

Being the Sherlock Holmes of Long Beach comes with its share of responsibility, which makes for a great read. Wrecked is a worthy entry into a world where everyone needs some extra IQ.