The comic book Bronze Age ranges between the early 1970s to mid-1980s. During that time there was a shift away from established routines as well as veteran creators. Marvel in the early 80s jumped at the chance to be bathed in cosmic rays. James Rhodes suited up as Iron Man; Daredevil became a brooding ninja; Thor cast away his human identity; the X-Men mourned the death of a founding member. DC Comics, however, was as stagnant as Slaughter Swamp looking to arise from the financial nightmare internally whispered as the “DC Implosion,” a mocking reference to the near-overnight cancellation of titles and dismissal of staffers and freelancers. During the Bronze Age, DC moved and schemed like Lex Luthor in an attempt to once again achieve dominance, or at least relevance, in the market and rise above their juvenile output into creating significant, lasting fun. In 1978, however, DC Comics was nearly a victim of a kryptonite bullet. 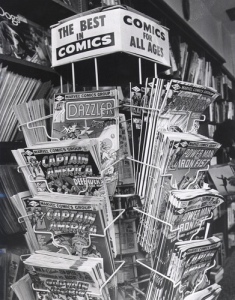 Prior to the rise of an independent comic book store market, comic book sales were solely gauged through newsstands. Remember those “Hey Kids! Comics!” spinning racks in the local ShopRite or 7-Eleven? Yup. Comics. Most newsstands didn’t care about comics as their return rate was paltry compared to higher-priced magazines such as Time, Sports Illustrated, and, the other attention-grabber for teens in the Seventies, Playboy. To battle for better positioning on those coveted shelves or racks, in 1978 DC Comics planned for an explosion of titles in order to saturate and dominate. The plan was to release close to 14 new titles and expand the page count with all other monthlies. The “explosion” lasted all of three months before DC’s parent company, Warner Books, demanded instant cutbacks. Hence, the “implosion.”

Keith Dallas and John Wells’ Comic Book Implosion from TwoMorrows Publishing is a fantastically-detailed look into this time period. Published within is an oral history from many creators who were involved with DC Comics. Packed with photos, art, and publication timelines, the book captures the crazy state of comic book publishing at the time. Honestly, it’s amazing that DC comics were produced at all with shoddy printing techniques, unreliable distribution, and, let’s all say it, forgettable content.

With the arrival of Jenette Kahn as publisher, DC made significant attempts to reclaim some of their former glory, all of which was being controlled with a Thanos-tight grip over at the House of Ideas. Marvel had better creators, better art, and better characters. DC was more diversified with horror, fantasy, and war comic offerings but their superhero state solely relied on their Superman-Batman-Wonder trinity. Flash and Green Lantern made up their secondary line along with diverse newcomers Firestorm and Black Lightning, but that was it. Any of their other established characters, who in future years would all boast long series runs, were relegated to back-up stories: Green Arrow, Black Canary, Hawkman, Aquaman, Atom, Martian Manhunter, Swamp Thing. Dallas and Wells get deep in their breakdown of reasoning and excuses.

My own monthly comic routine didn’t kick in until the mid-to-late eighties, even though I was practically taught how to read through the comics my grandfather would purchase for me from one of those spinner racks at the corner store. Admittedly, my eyes belonged to Marvel. The over-the-top heroics of Captain America, the threats against The Avengers, the relatable daily life of the Amazing Spider-Man. And Batman. C’mon, Batman was, and still is, cool as hell. Superman? Wonder Woman? Flash? Boring, dull, and irrelevant.

As a comic collector, I eventually gained a number of DC titles from the late Seventies, which ran the “DC Explosion” house ad. Over time I heard of the forgotten DC Implosion and gathered enough info to understand its role in history. With Comic Book Implosion I learned I was merely Krona discovering the vastness of creation. The book is deep, informative, and perhaps a touch dry.

Unlike other recent books detailing comic’s history, such as Sean Howe’s beautiful Marvel Comics: The Untold Story as well as Slugfest by Reed Tucker, Comic Book Implosion is not catered to the casual fan who might have (and may Atlantis help that causal fan) enjoyed Aquaman or perhaps heard of a movie called Avengers: Endgame. Comic Book Implosion is for that hardcore geek who groks Enemy Ace, Deadman, and I… Vampire.

Comic Book Implosion is deep – it meticulously lists creator credits for all the un-published Explosion titles – yet could have presented a stronger narrative. As a fan, I would have enjoyed more personal accounts from other professionals at the time, or from fans who became professionals. Yes, Mark Waid and Kurt Busiek provide clever enough soundbites, but if you are able to interview full-on comic geeks like Busiek and Waid, man, let them rip away with more tales. John Byrne, for instance, has a brief tale of an early DC encounter that never happened. However, he was working as a freelancer during that time. I would love to hear other relevant stories from cranky old John.

The book ends with the sensation of The New Teen Titans (helmed by two former Marvel vets), but DC’s modern-day success only starts there. The book could have touched even slightly-more into the world-shaping Crisis on Infinite Earths maxi-series as well as the revival of titles such as Swamp Thing, that would be the impetus for the creation of Vertigo Comics, a lasting and unique imprint.

Comic Book Implosion tells the rough tale of a difficult time that is hardly flashy. Or, truthfully, all that significant. Comic sales have always risen like Phoenix or plummeted to cataclysmic levels, like today’s barely-surviving industry. The DC Implosion was one such tale. Maybe not entirely unique, but entertaining as hell.

One thought on “Comic Book Implosion”