David Koepp’s career has been one of equal parts schlock and pop culture fun across the genres of crime and horror, scifi and superheroes. A little of the mysterious here, a little of the trodden there. You Should Have Left, ably written/directed by Koepp and produced by Blumhouse, lands dead center.

You Should Have Left teases artful What If…? elements before it plods into a standard haunted house tale where unrequited grief lurks as the de facto spook.

The ageless Kevin Bacon is the true heart of the story as he cements his leading man chops in a yet different role, following his fantastic spin as a corrupt sheriff in Cop Car. Playing Theo Conroy, retired banker now full-time dad, Bacon seeks to spend family time with his young wife (Amanda Seyfried) and their seven-year-old daughter by booking a family vacation at an isolated house in the Welsh countryside. The house is a killer design but at the film’s end it simply is a killer. Theo, you see, has secrets. As does Susanna. And the house feeds on those secrets while keeping its own.

You Should Have Left possesses a simple and tight concept. The Conroys are an easily enough family to watch. Koepp builds on that family love; always winking and nodding at the family secrets. What really happened to Theo’s first wife? Who is Susanna constantly texting? Aside from the occasional jump scare, that family drama does not make a compelling thriller. Too much of the pater familias; not of enough of genuine creepiness. When that horror finally ramps up? That’s when the yeah-yeah-I-get-it screams of the genre take over only to quickly let go. 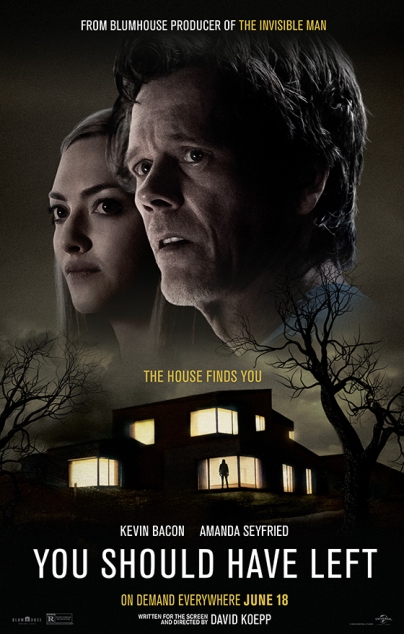 Koepp crazily establishes his movie around the nightmarishly-modern house. Ever-changing layouts. Hidden doorways. Poorly-lit staircases. Weird Polaroid photos in the laundry room. Other than Bacon, the house should get top billing. There always seems more to explore with unanswered questions aplenty. And mostly? These all go unfulfilled.

You Should Have Left wants to build into a creepy-yet-cathartic climax, perhaps similar to Blumhouse’s reimagining of The Invisible Man. The family drama and the haunted house plots do not weave into a frightening disaster. Rather, they are combatants. And the fight is more of a slow struggle than a WWE slamfest. The already-short run time could have been trimmed even more and would have instead resulted into a clever ep of the new Twilight Zone. Instead, the conclusion is rushed while Bacon’s hair is mussed. At least this cool-looking house in Wales is now available for rent.