There is nothing new here. Plot, scope, and acting all comfortably fit within the limits of a direct-release, low-budget, indie-action flick. Stolen cash from a deal gone bad. A convicted felon getting the crew back together again to reclaim their fortune. The grizzled sheriff, still on the case. Crime tropes and action clichés equally familiar but empty as a bag of Cheetos. Yet director Christian Sesma creates a fun experience.

Paydirt is rooted in the cleverness of Rodriguez’s El Mariachi and the hipness of Soderbergh’s Out Of Sight yet remains adolescent in nature deserving a fuller blossom.

After a deal gone wrong, thirty-three million dollars of cartel drug money is hidden in the Cali desert like pirate booty. Smooth operator and master criminal Damien Brooks (Luke Goss) – the Brit – reunites his team after six years away, all eager to get what they consider their rightful reward. Retired Sheriff Tucker (Val Kilmer) is on an unfulfilled quest of justice. He wants the Cartel stopped, the Brit back in jail, and his daughter (real life daughter Mercedes Kilmer) to become the new DA. Through it all, the backstabbed Cartel seeks to do their own backstabbing. Of course such intentions are ridiculously predictable and so head-shakingly transparent that you have to smile and roll with it, baby.

Christian Sesma knows he is crafting a low-budget film, yet totally expands on the scope by utilizing grand, outside sets and locations along with a good deal of aerial shots. Paydirt looks big. Each of the crew is introduced with crafty title cards that hunger to set the tone. Unfortunately, that introduced heavy-handedness never continues.

Sesma’s inspiration comes from Robert Rodriguez’s incredible how-to / autobiography Rebel Without a Crew, and truly he makes use of available resources. Yet Semsa never captures Rodriguez’s frenetic need; that desire to create. Instead of hip and new, Paydirt feels worn and excusable. Crisp, well-edited scenes linger too long on-screen, quickly losing any of that celebratory fizz.

Despite its low budget, Paydirt shines up as best as it can. The women look sexy, the men rough, and their guns shiny. Cinematographer Stefan Colson accentuates the barren desert in Southwestern pastels, the bright sun, the cool blues of water. But then everything looks good under a clean coat of paint.

Remember Val Kilmer? He was the epitome of cool. He was the ace pilot, the swagger-y gunslinger, the ultimate college roommate, and once, Batman. Now? He’s your crazy Uncle Mike with COVID quarantine hair. He mumbles through his lines and barely registers a presence. Kilmer must think he’s suited for better gigs. Sadly, this is his quiet twilight.

Paydirt, however, is entirely Luke Goss’s show. Perhaps best known for his role as Prince Nuada in Hellboy II, Goss, with his shaved Moby look and suave British accent, definitely has leading man chops. Paydirt is the highlight of his demo reel.

The remainder of the cast are adequate, if not forgettable in their roles. The heavy. The joker. The babe. The sickly crime boss. The actors perform their summer theater best with the cardboard roles offered. Everyone wants to be John McClaine. Instead, they merely cackle with cable TV mediocrity.

Paydirt yearns to be a hip heist caper, yet with most of said heist happening either off camera or in flashback, the film fails in its most basic regard. Sesma gets too complex with the backstory, wanting deep plays like in a Chandler novel. Instead, a tighter story bouncing within the confines of a low-budget indie film would have unleashed more of that desired, natural energy.

Paydirt looks good and is an easy movie made for a half-night’s worth of entertainment. Unfortunately, its ambition is too much of a stumbling block. Instead of a quick dance where everyone is all smiles and jubilation, Paydirt plods along, ultimately leaving you sweaty and alone. 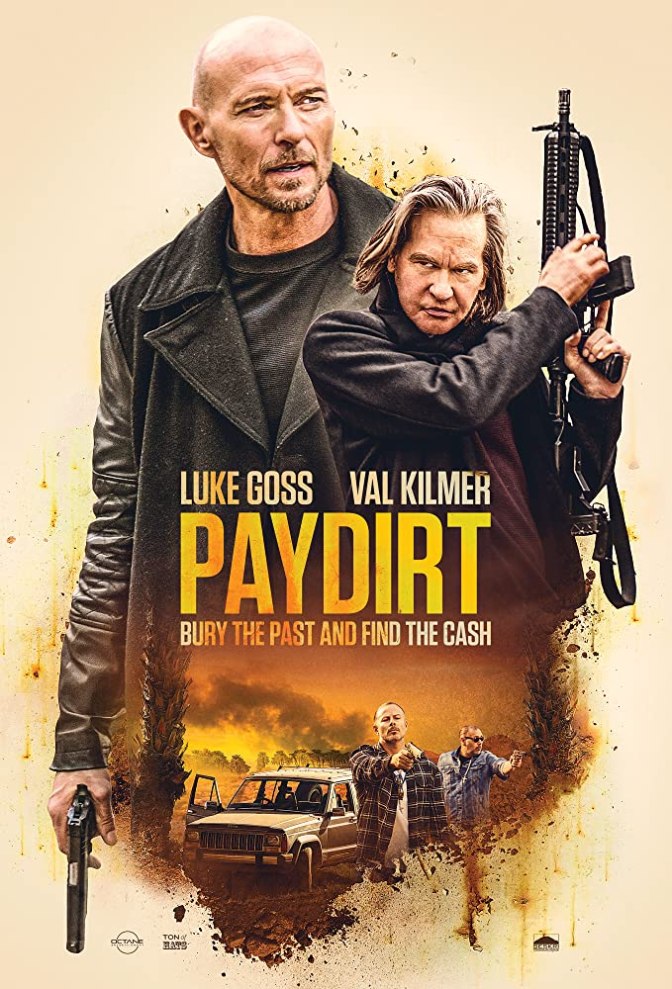 A version of this review appears on CRPWrites – the movie review site that you should most definitely check out and follow.