The criminally easy pitch for Sputnik is to assign the movie as Russia’s Alien. Ridley Scott’s 1979 masterpiece is inspiring, imitated and, most times, blatantly replicated, to borrow a word from another of Scott’s resume. Fortunately, Sputnik is more inspirational work than a mere copy. Whereas Alien might bring more blood to the game, Sputnik counters with flesh, and all the emotions that come within.

In these times of reboots and reimagines, Sputnik breeds nostalgia. More Stranger Things than slasher scare. More Starman philosophical than Predator rampage. And when the lights go out? As fun as Gremlins.

The year is 1983 and Soviet cosmonaut Konstantin Veshnyakov (Pyotr Fyodorov) is a survivor of a strange encounter in space. Once back in the USSR, Veshnyakov learns he is host to a parasitic xenomorph that only comes out to feed at night. Soviet Russia, still engaged in a Cold War power play, seeks understanding with hopes of weaponizing the alien. A Russian doctor renowned for unorthodox procedures, however, wishes to save the man instead, politics be damned.

Whereas the weaponizing plot is hardly original, first-time Russian director Egor Abramenko, with writers Oleg Malovichko and Andrei Zolotarev, uses that known factor to revisit a date in the past and inject it with modern day style. Similar to how the Duffer Brothers and JJ Abrams and Denis Villenueve have conquered known and familiar stories while making something unique, Abramenko mainlines on Gen X nostalgia and makes the cliché sci-fi chase thriller a modern-day morality play. There are no shortcuts taken. The creature must eat. 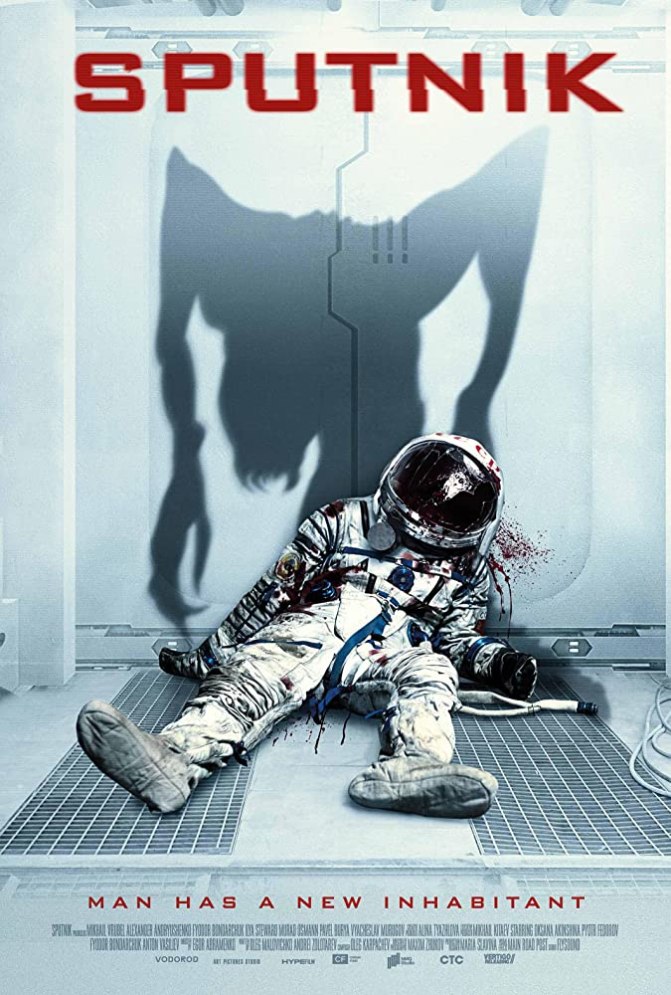 Abramenko constructs a deceptively tight feel to his movie. In the sci-fi world where too much is never enough, Abramenko channels Hitchcock and masterfully restrains, builds pressure, awaits an inevitable explosion. Instead of a neo-spectrum of stars, he creates a Soviet utilitarian universe of concrete gray; of wood panels and analog devices. Sputnik looks and feels like a contemporary 21st century movie yet breathes Cold War complacency.

A guarded Kazakh institute provides Earthbound claustrophobia replacing that of the Nostromo but the elements remain. Abramenko makes good use of those hallmarks of Eastern European war theater: the drab, twisting corridors and ever-vigilant security cams. Everything gives off a surface appearance of control. When that nighttime action does ramp up? Then fear assumes control. For Abramenko? Horror is cool.

The story calls for three essential roles – the cosmonaut, the doctor, the colonel – all spot-on performances for basic, primary characters. Yet, each of them also seek to play savior. Veshnyakov wants to fulfil his role as hero for the Motherland. Tatyana’s (Oksana Akinshina) desire, as a doctor, is to save the man. While Colonel Semiradov (Fedor Bondarchuk) plays all sides as father, friend, commander, and, possibly, a power broker.

Aside from the occasional flashback or dropped hint, none of the characters are remarkably deep. Veshnyakov and Tatyana possess scars stemming from a lost childhood and empty parenthood. They form a friendship of sorts that, most mercifully, does not deviate into a carnal relationship. Remember, this is a sci-fi thriller. Russian stoicism is all that is required and here that is as plentiful as there are ushankas in Siberia.

The creature F/X are a highlight. For a movie that delights in capturing a look from nearly 40 years back, the F/X are neither anachronistic nor dominating. The creature is believable, raw, and entirely physical. Likewise, the encapsulation of the facility is authentically practical.

Sputnik revels in its classic inspiration while showcasing an accessible tale. The movie breaks away from genre tropes and highlights the drama between the three principals and their strange visitor from another planet. Language aside, Abramenko successfully delivers a universal movie where isolation and mystery and fear and acceptance are all shared emotions within the human experience. Sputnik, along with its American counterpart The Vast of Night, is a new class of sci-fi that re-opens those questions about life among the stars. Although those answers might not come easily, the question on whether Sputnik is a mere copy of Alien is conclusively answered with a nyet.

A version of this review appears on CRPWrites – the movie review site that you should most definitely check out and follow.

One thought on “Sputnik”