The Ranger is over 300 pages of shady politicians, a suspicious land deal, Neo-Nazi meth dealers, and a gutsy pregnant girl. Ennui settles in around page 40. In fact, it is only the location – rural Mississippi during the cold winter months – that provides any sense of difference as even the title character, Ranger Quinn Colson, doesn’t do much other than brood silently, brag soundly, and eat a fair share of eggs and ham. And if anything, that is exactly what The Ranger needed more of: ham with a healthy side of cheese. Instead, all we get is dry toast. 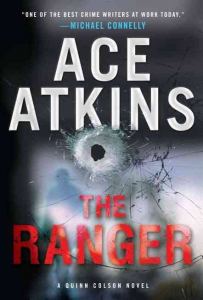 Ace Atkins provides his natural take on the surroundings, the environment, the establishment of characters, yet he doesn’t get any deeper than that. Colson is the typical silent type who is wound so tightly he is incapable of any action that doesn’t come by way of orders from some CO while out on patrol in Nowheresistan. His lone friend is a Stand By Me good ole boy who doesn’t get any characterization outside of his initial introduction. The villains are predictable. The backstabbing inevitable. Even the high noon showdown is wrapped up in a scant two or three pages with the cavalry’s arrival feeling more Appaloosa-slow than some needed over-the-top-ness ala The A-Team.

The hillbilly/redneck justice genre can be a real hootnanny. Shoot, even good old-fashioned western-style revenge tales get the blood a’flowin’ and the pages a’turnin’. The Ranger is a series of stop-and-starts, of teases and foundation laying. The good boy grimaces and bad guy postulating within has all the uniformity of Barry Manilow when what you really want is the spontaneity of James Brown. Or the A-Team.