Crime fiction loves playing in the shadows cast by all the glitz and spotlights shining around Hollywood. Deception. Filth. Murder. All elements that compete with the celebrity. The fashion. The dreamy escapism being sold. Police procedurals lead the pack in exposing these shadows. Yet, once in a while, a new direction is shown on that well-beaten path. Joseph Schneider’s hip debut, One Day You’ll Burn, provides such a bearing. 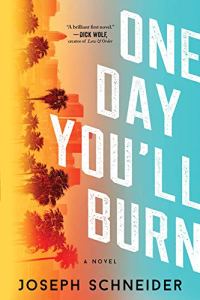 Tully Jarsdel – mockingly known as the Professor – is not a typical detective and his first leading case follows suit as a completely cooked body is dumped outside a Thai pagoda. Hollywood is known for its weird side; this case is no different. Jarsdel and his partner, Morales, look for clues within that weirdness while also having to deal with a unique sort of serial killer – a sicko killing dogs on their owners’ wedding days. Yup, weird, which gives this book feeling.

Jarsdel has his own complications, namely his passion, or lack thereof, of his career. He refreshingly questions, non-stop, if being a cop is his true role in life. He looks to provide a karmic balance, if such a thing is possible in the morally bankrupt City of Angels, all while he and Morales attempt to find both killers.

Schneider’s style is easy and fun. He avoids the cliché procedurals with real-world names (who the hell names a star detective Tully Jarsdel?) and beautifully-scripted dialogue. With the story set in Hollywood, Schneider makes good use of the locale and drops in plenty of movie trivia for cinema geeks while even working in the profession itself as the impetus, and possible cause, of the a-story murder.

One Day You’ll Burn proves that there is originality in the town that has seen it all. Detective Jarsdel is not a hard-boiled copycat who pounds away at both villainy and Scotch but a hip cat who fights LA traffic and sips rosé. He questions his role with the LAPD, his family, and his life, knowing full well that everything will work out right. Hey, this is Hollywood, after all.

Thanks to NetGalley and Poisoned Pen Press for the advanced read. Looking forward to more.

One thought on “One Day You’ll Burn”