“No.” The response was simple, curt, and – honestly? – expected. Doesn’t mean that was the desired answer.

“There is no way,” the response continued, “that you are taking the day off to go play as a movie extra.”

In September of 1998 I was a web designer at a solitary dotcom floating in an angry sea of other solitary dotcoms trying our damndest to become the next eBay or PayPal or Google. Oblivious to the fact that in two years we’d all simply be damned. I also clerked part-time at a video store. More on that later. Like many dotcoms of the time – the time being the Boom before the Bust – the studio was hip, young, and agile. Clients as large as USA Today, as humble as the corner pizzeria, boasted our services: website creation, hosting, and security; online, pre-flight proofing; non-linear digital editing. Operating under the “work hard, play hard” philosophy of the day, the company offered such fringe benefits as a fully-stocked soda machine, a PlayStation equipped breakroom, and long-into-the-night network playing of first-person shoot ‘em ups like Unreal, Quake, and Half-Life. When a big-time movie release occurred, like The Matrix or The Phantom Menace, a long lunch would be called as the team would take in a matinee en masse.

Those movies didn’t debut until 1999.

In 1998, in the supposed peak-time of all this goofy fun where the kids were taking over the world one dotcom at a time, I was, ironically, denied the chance to take advantage of a different kind of fun. The chance to be an extra in a movie shoot. A real movie shoot. Not in far off Hollywood. Right here. In Philadelphia. For a movie that would have as much dominance and name recognition as Neo’s red pill adventure and Anakin’s podrace.

The video store was a mother-and-son owned oasis of Gen-X attitude magnetically recorded on VHS tapes and on shiny DVDs. Blockbuster might have had the wall space but we had the head space. Could you ask a Blockbuster bubble-gum popper a question about Jean-Pierre Melville’s Le Samouraï or debate the humorous metaphors of Wes Anderson? Please try. And in 1998, NetFlix was merely a contender.

Aside from $1.99 a night rentals, we provided a service. We educated customers. That quirky-looking dude with the teeth in those intellectual smash hits of Con Air and Armageddon? Yeah, he is also in this gosh-darned, neat-o crime thriller called Fargo. And plays a colorful killer in Reservoir Dogs. And directs this creepy character piece in Tres Lounge. Yeah man. A service.

This was my college job that I hung on to for two nights a week mostly to score free rentals. Honestly? I also enjoyed the conversations with customers. That educational service I was returning back to society.

The store had some cool-cat clients who valued and even returned on said services. Like the manager of the Ritz Theater that regularly provided us with free passes. The pizzeria owner next door who supplied us with cheese pizzas for comped rentals. And oh yeah, a woman who worked for the City of Philadelphia Film Commission. And with that… let’s get back to the story.

Monday night. One of my tasks was prepping the shelves for the new releases that debuted on Tuesday. The perk of this was watching the occasional new release ahead-of-schedule over the in-store TVs, especially if the Monday Night Football match-up was weak. That night featured a killer AFC match-up between the Broncos and Pats. I was watching a movie.

“Is that Robert Loggia?” a customer asked. Head motioning towards the wall-mounted screen.

“Yeah. He’s playing this boy’s grandfather. Fun movie so far. Denis Leary’s the dad,” I responded. My attention more on the TV then the, you know, actual paying customer.

“My sister-in-law thinks he is a charming man,” she continued. Eight additional Ms added to charming. Charmmmmming. The ing taking a swing up an octave.

For the first time in the brief convo I focused on who I was speaking with. A regular. As was her husband. She was tall; probably in her mid-fifties. Seeing as how I was in my mid-twenties, anyone older than their mid-thirties looked to be fifty.

“Oh yeah,” she replied. “Him in Scarface? Yup.” A few beats passed as we watched the action on the TV. “She sat next to him at a show in AC. Some casino. During the entire performance they were talking. He was telling her stories. Buying her drinks. Flirting with her, I guess. She loved it. Couldn’t tell me a single thing about the show. But Robert Loggia? Hmmm. Must’ve been close to twenty years ago.”

Attempted to imagine the kindly grandfather on the screen as a smooth operator. The stern general from Independence Day. The creepy Mr. Eddy in Lost Highway. All of them hitting on a South Jersey housewife.

“What are we watching?” she finally asked. 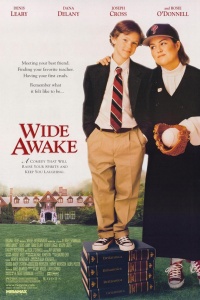 I didn’t know the answer offhand. Showed her the VHS cover. “Some dude with the most excellent handle of M. Night Shyamalan.”

“He is?” I asked. The skepticism of my twenties as fresh as the pout on young Julia Stiles’ face. “How do you know this?”

“I met him. I work for the Philadelphia Film Commission. He had to file permits for a shoot he’s doing tomorrow. In fact,” she said, turning to look directly at me. Sizing me up as if she were Robert Loggia and I was an innocent sister-in-law amazed by the flashing lights and ringing bells of Atlantic City. “What are you doing tomorrow?”

“Working?” Truly hoping the question was platonic and not a creepy Robert Loggia come-on.

“So listen. This Shyamalan hombre is filming tomorrow. In Old City. On 4th. We need extras. If you’re available you should come. You have to have your car. It’s a traffic scene. Filming will probably take all day, so bring a snack. And something to listen to.”

The details were hastily scratched on the back of a rental receipt. Location. Contact name. Time. Phone number. She smiled and left. I stood there amazed. Amazed not so much being an extra or even the glimmer that I – or at least my 1996 Toyota Corolla – would appear for a heartbeat in a movie but at the prospect of seeing the filming of a Real Big Hollywood Movie. A year-and-a-half back, when in New York visiting a client, I stumbled onto the shoot of Dick Donner’s Conspiracy Theory but the only excitement I saw was a soon-to-be-unemployed grip flirting with a soon-to-be-unemployed extra. This was the chance to see something special.

All I had to do was inform my boss I needed the day off. I worked for a cool-ass dotcom. I was going to be an extra in a movie. What could go wrong?

“There is no way that you are taking the day off to go play as a movie extra.”

That cool-ass dotcom of mine took off for stress-relief day to take in a late-summer matinee. Ironically, it was to go see this Philly-based flick that had gained a ton of great press directed by hometown-wonder M. Night Shyamalan: The Sixth Sense.

The movie would spend five weeks at Number One. Overall for 1999, it would rank second directly behind … Episode I: The Phantom Menace. I see dead people was as prevalent as Darth Maul’s double-lightsaber. Coincidentally, not only would our entire studio shut down to attend that new Star Wars event, local news broadcasts covered our blatant audacity.

Three months later we were at it again. This time press free.

“I knew he was dead the whole time,” that work-hard/play-hard CEO of mine bragged.

“Here’s something you didn’t know,” I jumped in amidst the chorus of denials and astonishment from other employees. “The car accident scene? The one where Cole is telling his mother that his grandmother is proud of them? Yeah. That one? I was asked to be an extra in that scene.”

“Oh, I most certainly was.”

“A connection from the video store. A customer who works for the Philly Film Commission. She was looking for extras during filming. Extras with a car. She needed people for a traffic scene. I even asked you for the day off.”

“No you didn’t. I totally would have let you. You work for a cool-ass dotcom. All you had to do was ask…”

His excuses, all grandiose smiles befitting the ultimate salesman he was, fell to the sticky floor like forgotten popcorn kernels. He was in a good mood. As was I. Regardless of missing out of that first-hand experience, I treasured the cinematic adventure. Partaking in a sad, even lonely movie; allowing myself to be mesmerized by the story. Not trying to outthink it or guessing at the mystery.

The weeks ahead? As the movie worked its way throughout all of America? As moviegoers worldwide enjoyed that secret Shyamalan treat? My inner mantra was not I see dead people. Nope. Mine – and it was all mine baby – was slightly more bitter.

I knew I should have called out.