Framed is a straight-minded LA noir drugs-and-murder mystery that although is fun and fast-paced has all the feel – and staying power – of a late-90s direct-release indie film. Maybe starring Michelle Forbes, Thomas Jane, and Keith David. S.L. McInnis succeeds in creating characters painted in shades of scandal yet for as fast-paced as the read is, the periods of slow build is more death crawl than murder spree. 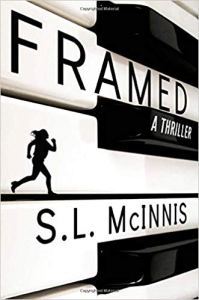 The chapters within Framed move between five central characters over a period of five days. Beth Crawford is an accomplished pianist trapped as an unrecognized music teacher. Her husband, Jay Montgomery, is a wannabe movie producer. A dreamer without the bankroll. Their lives are mediocre; their marriage stale. Then former-friend and current wild child Cassie Oglivy crashes into their lives. She’s gasoline on fire; habanero on taco meat. She’s danger and fun rolled up into one and she’s on the lam. She sees her friend as a safe haven; a chance to escape from the drug deal gone wrong. Beth and Jay see Cassie as an escape. In LA noir fiction, nothing goes as planned.

While Cassie runs to Beth and Jay, both fall for her in different ways. Jay with her beauty; Beth with her spirit. McInnis builds up this delicious tension between all three while dealing with the mystery. That element drops as a simplistic police procedural and maybe too simple at that. Where simple can be easy, it also become too convenient. Framed swerves between these zones like a drunk on a bender. Sometimes the ride is exciting with no fear. Other times? Head-shaking ennui with a questionable urge to get back on.

Framed is an enjoyable read and a good escape. For the reader anyway.

High-five to S.L. McInnis for the shout-out to Bryn Mawr and the Philly Main Line. Also thanks to NetGalley and Grand Central Publishing for the steal of a read.