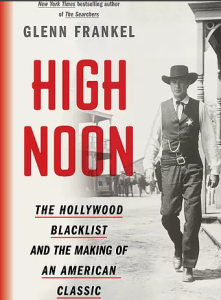 The weight of Glenn Frankel’s second book in looking at the historical Hollywood is truly outlined in High Noon’s sub-title: The Hollywood Blacklist and the Making of an American Classic. Frankel provides a deep-dive directorial-style narration into the making of the Gary Cooper/Grace Kelly Western classic High Noon, but this account’s true showdown occurs as Congress and HUAC play the men in black with the artist as the white hat, fading hero pressed into one more battle.

And the weight this book carries is impressive. Frankel intensely presents meticulous research into the time and era of the Red scare, its affect on the Hollywood engine, and the turmoil brought on by the ensuing witch hunts. However, such intensity often comes off with the academia styling of a research paper that pulls away from the historical narrative of the film’s origin. For a quicker, compelling view into the times of the notorious Hollywood blacklist, one needs only to view the well-done 2015 film Trumbo.

When the eponymous film is in focus, Frankel creates compelling, compassionate characters out of writer Carl Foreman, producer Stanley Kramer, director Fred Zinnemann, editor Elmo Williams, and star Gary Cooper. Each of these men’s desires, and especially fears, are triumphantly captured and endowed with a humanizing sense of wanting no less than to be free and create. Their stories are strong and wonderful and flawed and real with the end result, the film High Noon, becoming an enduring classic. Frankel’s read, High Noon, unfortunately, becomes so enraptured with the history, that the magic of Hollywood is forgotten for long, dry spells.

Historian purists will certainly applaud Frankel’s research. Fans of film might find this book cumbersome. The lawman might finally get his hand at justice, but the sun has already set.

Many thanks to NetGalley and Bloomsbury for the chance at this advance read.